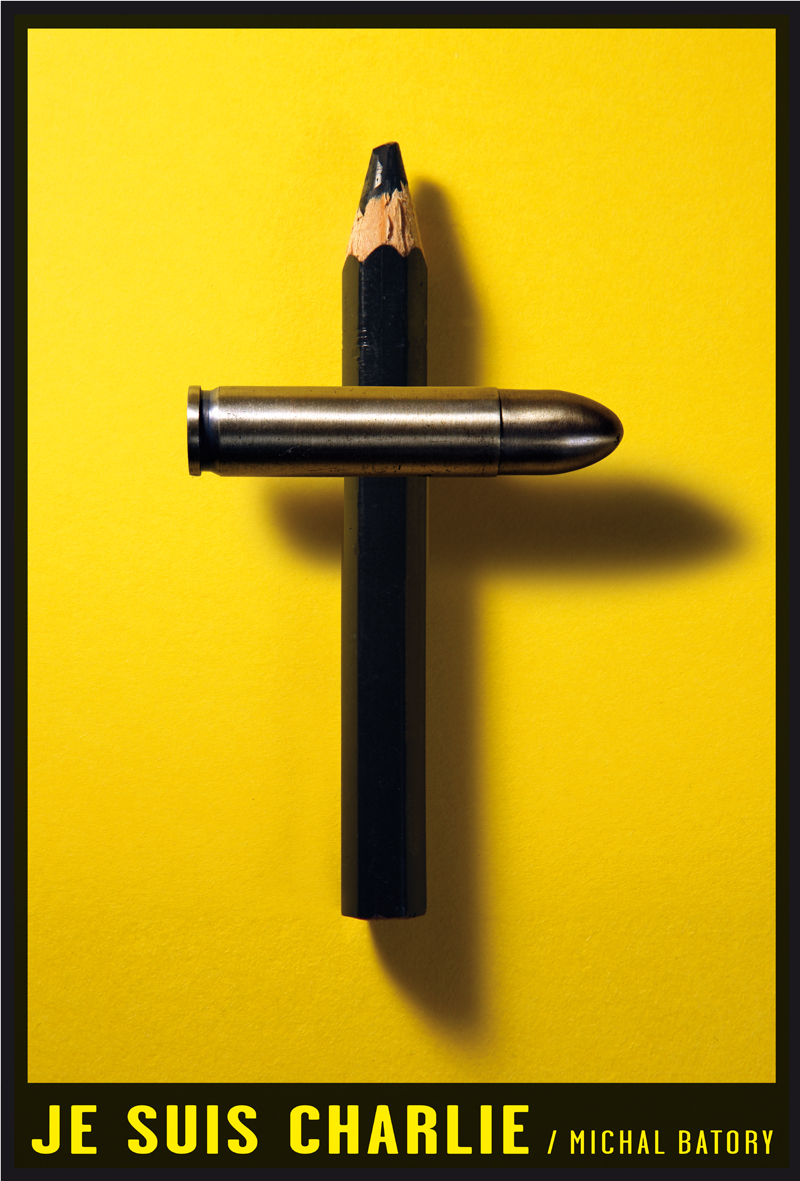 Beautiful and very moving jewelry inspired by a poster, created by Michal Batory in reaction to the terrorist attack perpetrated on January 15th, 2015 against the Charlie Hebdo magazine, famous for its satirical drawings.

On January 15th, 2015 the whole world watched, shell shocked, the news of a barbaric attack perpetrated against a famous French satirical magazine Charlie Hebdo. Known for its taboo-breaking, irreverent, and even sacrilegious for some, drawings it became worldwide famous in 2006, after republishing the caricatures of Mahomet first published in a Danish. Cabu, one of Charlie Hebdo’s caricaturists, created a cover for this issue, which depicted the Muslim prophet crying “C’est dur d’être aimé par des cons!” (“It’s hard to be loved by jerks!”). It caused a huge uproar against the magazine, both from French Muslims – whose official organizations engaged a lawsuit against Charlie Hebdo – and the international Muslim community.  The Islamic terrorist organizations started to threaten the journalists and caricaturists. Since then, some members of the editorial office lived under police protection. It didn’t deter them from standing against the obscurantism, denouncing it, and defending the freedom of expression. They paid the highest price for it: on January 15th, 2015 two terrorists forced their way into the Paris headquarters of Charlie Hebdo and opened fire, killing twelve persons: cartoonists Cabu, Charb, Honoré, Tignous and Wolinski, editors Elsa Cayat and Mustapha Ourrad, economist Bernard Maris, guest Michel Renaud, maintenance worker Frédéric Boisseau and two police officers Franck Brinsolaro and Ahmed Merabet. They also wounded eleven other persons, four of them seriously.

This shocking, barbaric attack provoked a large number of reactions all over the world, with people expressing their shock, support to the victims, and outrage against the murders under a rallying slogan “Je suis Charlie”.

Michal Batory, being himself an artist known for his expressive, attention-grabbing images, also decided to express his shock over the brutal murders of his fellow artists. He created a poster, very simple yet very moving. It is composed of only three elements: a pencil, a bullet – together they form a cross – and the slogan “Je suis Charlie”.  Batory’s poster is an homage from one artist to his fellow artists, who stood tall against the darkness, the obscurantism, who refused to bend to the threats of violence, who defended the freedom of expression against all odds. And who paid for it the highest price. It is also a cry of outrage against the extreme violence of those who wish to force others to live by their own beliefs and in doing so threaten hard-earned French freedom of expression and way of living.

But it is also a message of hope. In Christian culture the cross is associated with death, but also with resurrection – it brings a message of hope, of forgiveness. The bullet in the poster goes sideways as if straying, but the pencil faces upward, just as the weapons of angels and archangels, fighting against the forces of evil, were facing in the centuries-old Christian images. 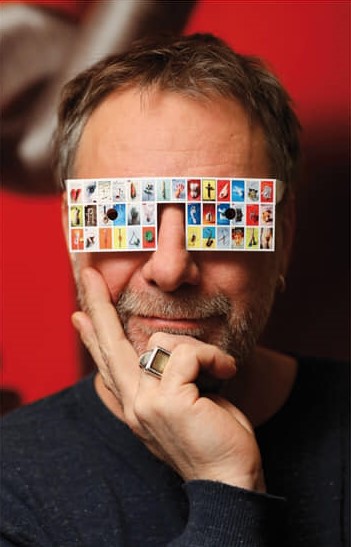 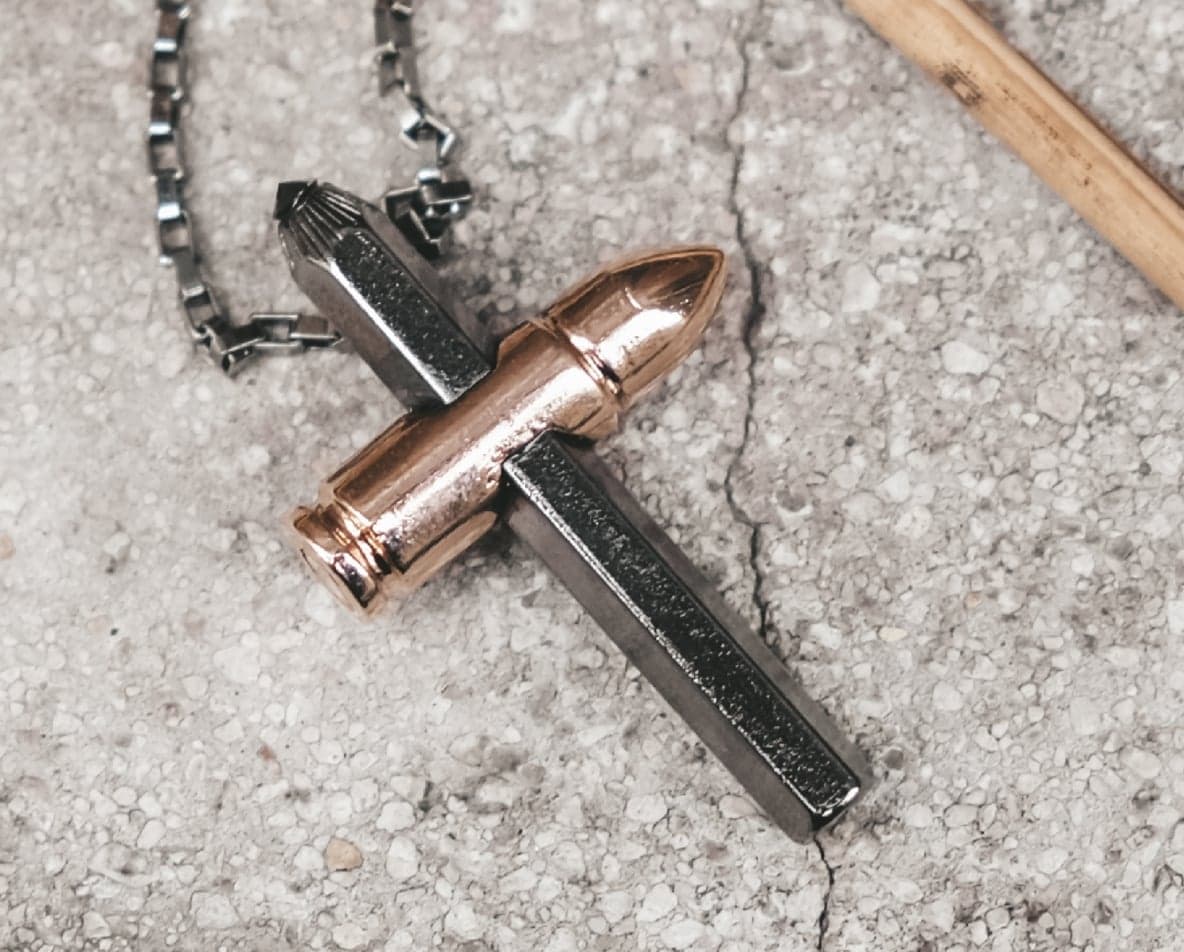 And in the jewelry, this message is even more pronounced, since it is actually the pencil that pierces the bullet and not the other way. It emphasizes the artist’s belief and hope that ultimately, the good – art, culture, intelligence – will triumph over the evil – violence, and hate.

This small collection is an homage to the victims of the Charlie Hebdo massacre, but also to all those who stand every day against the darkness that threatens our world – against violence, discrimination, bigotry, hate.

This small collection is made of bronze – the noblest sculptural material – and gold-plated (the bullet), black ruthenium-plated (the pencil) with a black Swarovski crystal at the end of the pencil. Available in a limited quantity. 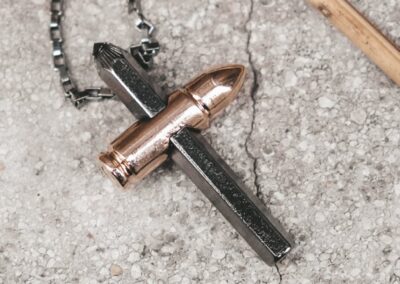 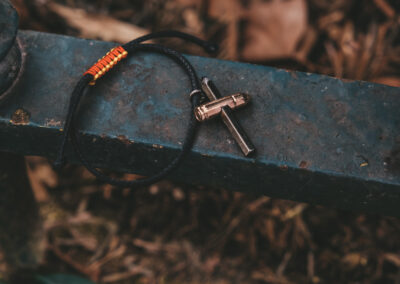 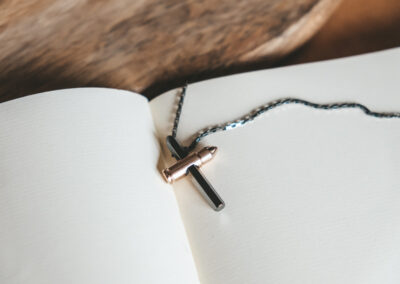 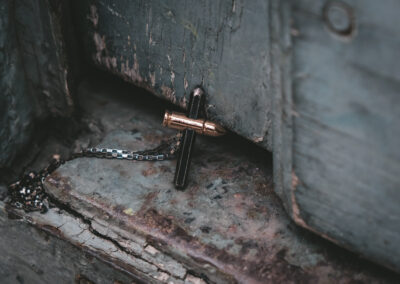 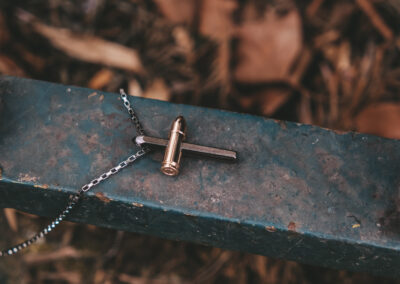 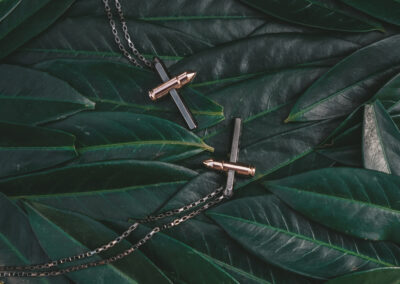 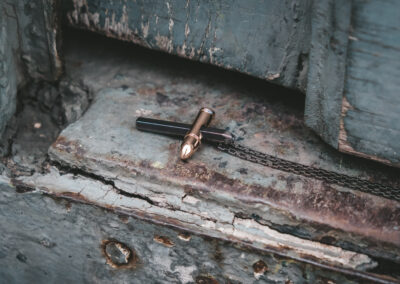