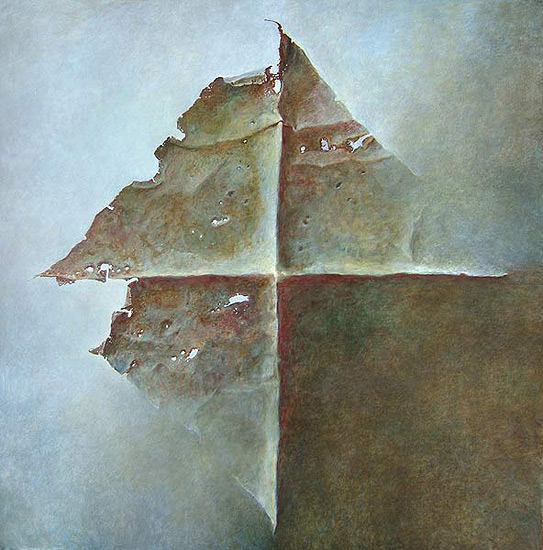 On this day 21 years ago, Zdzislaw Beksinski was brutally murdered in his Warsaw apartment. Beksinski, who was always very self-sufficient and kept isolating himself from people – even going as far as refusing to attend the openings of his exhibitions – after the death of his beloved wife and the suicide of his only son, became even more of a hermit. He transformed his apartment into a fortress, afraid of some kind of an attack. In a letter to a friend, he wrote: “The brave people from the videophone company are now breaking down the iron door to my hideaway, embedding a mini-camera there, which in their opinion is a Korean wonder and something that will allow me a little more than to distinguish a human from a bear standing on its hind legs, which was the upper limit of the possibilities that offered the camera placed there before. You are not old yet, but when you will be old, you will find out that when you grow old, the fear of an attack grows in a person. The bell does not ring my door more often than once a week, but Jaroszewicz* made a mistake only once in his life and that was enough. I will probably make a mistake one day and what I consider a harmless old lady in a fur coat will turn out to be a bear that escaped from the circus and rang my doorbell”.(1)

In a way those words were prophetic: Beksinski made a mistake and let in an acquaintance. But a man turned out to be a bear rather than an old lady in a fur coat and killed Beksinski, while his last painting was still drying on an easel.

* General Piotr Jaroszewicz was the Prime Minister of Poland between 1970 and 1980. In 1992 he was brutally murder and the case was unsolved for a very long time.